Though based on an existing gun, this version of the 5″/25-Caliber gun was specifically redesigned for submarine use. The entire gun was made of corrosion resistant steel, so that it could withstand repeated submersion in saltwater. This gun came into service in 1944, and was intended to replace all earlier guns on fleet submarines. This was the last deck gun used by American submarines. A well-trained crew could fire twenty rounds per minute, or one round every five seconds.

World War II in the Pacific presented a unique opportunity for submarine gun actions. While other navies were removing the deck guns from their submarines, the United States not only designed a new, heavier gun, but equipped several boats with two guns and a simple fire control system. This was a result of the severe attrition among Japanese escorts.

1) Gun Captain: Opens the breech and inspects the mechanism and bore before firing to insure there are no obstructions. Supervises the rest of the gun crew.

2) Trainer: The Trainer sits in the right hand seat, moving the gun from side to side by use of the hand wheels, which connect to the traverse ring around the base of the mount through a system of gears. He is responsible for aiming the gun in the horizontal plane.

3) Pointer: The Pointer sits in the left-hand seat, and elevates and depresses the barrel. He aims in the vertical plane. The Pointer also fires the gun by stepping down on the right pedal, which is hydraulically connected to the firing plunger on the left side of the breech.

4) Sight Setter: The sight setter stands directly behind the Pointer, on the left side of the gun. He is responsible for entering sight corrections, so that the optical sights used by the Trainer and Pointer are adjusted to coincide with the point of aim on the target.

5) First Loader: The First Loader has two primary responsibilities. Before the first shot, he manually sets the safety, so that the gun cannot be accidentally fired while the Loader or other gun crew member is behind the breech, and releases the safety when the gun is ready to fire. He also physically loads the gun, shoving the shell into the breech.

6) Second Loader: The Second Loader assists the First Loader, taking the shell from Ammunition Handlers and passing it to him.

7) Ammunition Handler (2): The two Ammunition Handlers receive the shells, still in their storage tubes, remove them from the tubes, and pass the shell to the Second Loader. One, wearing asbestos gloves, catches the cases as they are ejected, so that they can be returned to the arsenal for reloading. There are additional ammunition handlers in the magazine and in the after battery compartment, who pass the shells up through the ammunition scuttle. 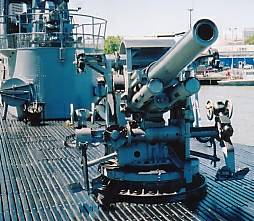 Front view of 5″/25-caliber gun, Mark 17, on a Mark 40 wet mount, on the after deck of U.S.S. Cod. The gun, like virtually everything else aboard, has been maintained in outstanding condition. This gun can be elevated up to 40° and depressed 10° below the horizontal. The 5″/25 was designed as primarily a single-purpose gun, for use against enemy shipping, though it could theoretically also be used against low-flying aircraft.

The two tubes under the barrel are the counter-recoil cylinders. Each contains a hydraulic damper piston and six springs, which are used to pull the barrel back to its original position after it recoils. A shorter cylinder between them contains the recoil piston. The barrel and breech assembly can recoil a distance of 22 inches.

A closeup of the Depression Stop Mechanism. This spring-loaded rod rests on a cam that surrounds the mount. This automatically raises the barrel if it is unintentionally aimed at certain parts of the boat. (Crews were, of course, cautioned not to shoot at the parts of the boat that were not protected by this mechanism.) 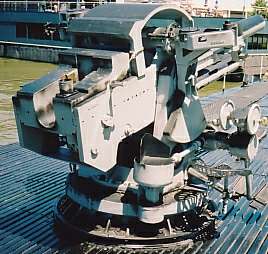 The right side of the gun, showing the Trainer’s seat and handwheels, and the breech mechanism. The lever on the side of the breech is used to open the breech block. This gun uses a rising wedge type, which can be a little frightening looking at first, since it gives the appearance of a very efficient amputation device. In fact, it is designed to push the first gunner’s hand out of the way as it rises, so as long as he pushes the shell into the breech with his palm, holding his fingers out of the way, there is little danger. The breech block closes automatically when the shell is loaded, and opens automatically, ejecting the shell, as the gun recoils.

The Trainer aims through an optical sight, with pressure-proof covers on both ends. The sights are not mounted on Cod‘s gun. 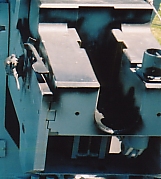 Another view of the breech, this time from the left side. The flat lever on the upper left side is the safety catch. The First Loader sets this manually prior to the first shot. It sets itself for subsequent shots. The First Gunner’s final act after loading the gun and insuring that everyone is clear of the recoil zone is to release the safety. The lever on the side, behind the hydraulic cylinder, is the firing plunger. This is linked to the Pointer’s right foot pedal, and can also be tripped manually.

The Sight Setter uses the two handwheels on this device to enter the angle and deflection settings as they are called down by the gunnery officer, who observes the fall of shot from the cigarette deck at the rear of the conning tower fairwater. The settings appear on dials in the window. Adjusting the angle raises or lowers the point of aim for the left-hand sight, while adjusting deflection adjusts the aiming point to the right or left on the right-hand sight.

Cod‘s Ammunition Scuttle and ready-use ammo locker. The 5″/25 gun fires fixed ammunition—that is, the shell and cartridge case are fixed together at the arsenal where they were manufactured, and don’t have to be handled separately. Several rounds can be stored in the pressure-proof locker for immediate use. The pipe-like scuttle leads down into the pressure hull, and ammunition is passed up through it during a gun action.

The best way to get a close-up look at this gun, of course, is to visit Cod, which is located in Cleveland. A short 1944 training Navy training film, transferred to video tape, is available from www.militaryvideo.com.