Once submerged, a World War II vintage submarine was severely limited in its options. With the exception of the late-war German Type XXI and Type XXIII, capable of a submerged speed of 16 to 18 knots, and the even more sophisticated Japanese I-201 class, which could manage 19 knots submerged, and none of which had any significant effect on the war, World War II submarines were limited to a top underwater speed of 9 to 10 knots. At that, such speeds would quickly drain thebatteries, with the result that the effective speed of a submerged fleet submarine was barely three knots.

With these limitations on speed and endurance, a submarine couldn’t effectively run away from a pursuer. The only option was to hide, trying to maneuver to avoid being caught in the escort’s active sonar.

Research had discovered that water temperature often varied with depth. Even more importantly, the changes in temperature were frequently fairly abrupt, so that the sea water would form layers. It was soon discovered that these thermal layers affected sonar performance. 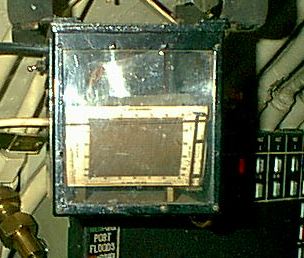 Below a thermal layer, a submarine’s active sonar performed poorly when trying to acquire a target. Conversely, a surface ship’s sonar pings were reflected and scattered by the layer as well, allowing the submarine to hide beneath it.

The American Submarine Bathythermograph, such as the example here installed aboard U.S.S. Cod, was devised to take advantage of these thermal layers. The bathythermograph recorded a combined depth/temperature trace on a carbon-coated card. As the boat descended, a stylus rubbed off the carbon from top to bottom on the calibrated card. A second control rod moved the stylus laterally as the temperature rose and fell. (This is essentially the same way an Etch-A-Sketch® works, but with a simple automatic system controllng the stylus.)

If the trace shows a relatively straight line from the surface to operating depth, the water is said to be isothermal. This sort of water provides ideal sonar conditions, but isn’t very good if you’re trying tohide from sonar. A positive (temperature increase with depth) or negative (temperature decreases with depth) temperature gradient provides better conditions for evading enemy sonar. The best conditions are found when the temperature abruptly rises or falls several degrees within a few feet of depth. Getting below such a layer could drastically reduce a submarine’s chances of being detected.

One factor that could affect the ability to hide under a layer was the size of the submarine itself. Diving at an angle, it was possible for the bow to be below the layer while the stern had yet to pass below it. If a commander wasn’t careful, it was also possible for the upperworks to protrude above the layer.

Temperature layers, and their effect on sonar performance were known in all navies of the period. The United States, with the development of the Submarine Bathythermograph, was simply the only one to create a simple, effective device to exploit it. The rest had to rely on noticing temperature changes on a thermometer.