One of the more amusing scenes in the 1966 Frank Sinatra movie Assault on a Queen occurs when Sinatra’s band of merry adventurers start hauling a load of truck batteries aboard their salvaged u-boat, presumably to replace the sub’s original batteries. But the scene does point up a common misconception about submarines, and that is just what constitutes a “battery.” A submarine’s battery is not a small, unitary device like a car battery, but a massive collection of huge individual cells gathered in a large compartment in the lower section of the hull. 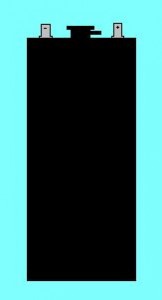 World War II American fleet submarines had two batteries, each composed of 126 cells. By comparison, a 12-volt car battery contains only 6 cells, each producing about 2.25 volts when fully charged, with a maximum power output of about 45-50 amps. Each cell in a submarine battery produces from 1.06 volts when fully discharged, to 2.75 volts at the optimum output, so connecting the 126 cells in each battery in series gives a usable output of from about 210 to 350 volts, and a power output of as much as 15,000 amps with both batteries connected in parallel. (In earlier submarines, the two batteries could be connected in series for additional voltage, but this was no longer done with the much higher capacity fleet submarine batteries.)

Each cell was about 54 inches high, 15 inches deep, and 21 inches wide, and weighed about 1,650 pounds. The two primary manufacturers were the Exide Corporation (now Exide Technologies) and the Gould Storage Battery Company (now Gould Electronics, Inc.). Each battery cell was housed in a separate acid-proof tank as a precaution against leakage, as the electrolyte was highly corrosive and could seriously weaken the pressure hull if a leak went undetected.

The battery cells were made up of lead plates, suspended in a sulfuric acid/water solution, exactly like that used in car batteries. As the cells were charged, the breakdown of the water portion of the electrolyte could produce hydrogen gas. This was removed through an elaborate ventilation system and discharged outside the pressure hull. If allowed to accumulate, of course, this gas would constitute an explosion hazard.

An additional hazard, which could be encountered in unusual circumstances, was saltwater contamination of the batteries. If saltwater mixed with the electrolyte, chlorine gas could be produced, with obvious dangers to the crew. A limited chlorine gas problem added to the woes of the Squalus survivors as they awaited rescue.

The battery cells required daily service. This was usually delegated to the junior members of the electrical department, who could generally be identified by the white spots on their dungarees from acid splashes. Because of the quantities of distilled water needed to keep the cells topped up, it was supplied through a hose from large tanks adjacent to the battery compartments. The space above the battery compartments was used for accommodations, with the officers’ staterooms, wardroom, and chief petty officers’ quarters above the forward battery and the main crew berthing area above the after battery.

Improvement in battery technology and capacity was always an important goal in submarine design. A larger battery would allow longer submerged operation and greater speed. One of the main features of the GUPPY conversions following the war was increasing battery capacity.