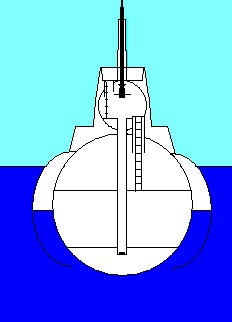 Buoyancy is one of the more basic physical principles. At its simplest, it may be explained in this way. When you put an object in water, it will displace (push out of the way) some of the water. If the object’s weight in less than or equal to the weight of the water it displaces it will float. If it weighs more than the displaced water it will sink.

This even applies to other liquids. Gasoline and oil weigh less than water, so they float on top of it. This is one of those little details that will be important later.

A submarine works by being able to vary its displacement. Most of the time the ballast tanks are kept full of air, which makes the sub lighter than the water it displaces. You can demonstrate this principle by inverting an empty glass and trying to push it under in the sink. As long as it stays full of air it will want to float. In this graphic, the boat is surfaced, with the air in the main ballast tanks holding the boat on the surface.

To submerge, the crew opens vents at the top of the ballast tanks. This lets the air out. The bottom of the ballast tank is open to the sea, so as soon as the air is released water comes in to take its place, the displacement increases, and the boat slips below the surface.

Submarines are designed so that, with the main ballast tanks full, the weight of water they displace will be as close as possible to exactly equal to the weight of the boat. In practice, the boat should retain a slight amount of positive buoyancy, so that it will want to slowly rise to the surface if nothing else acts to keep it under.

In addition to the main ballast tanks, which are normally kept either empty or completely full, there are also several variable ballast tanks inside the pressure hull. These include bow and stern buoyancy tanks, various trim tanks, and the negative and safety tanks. 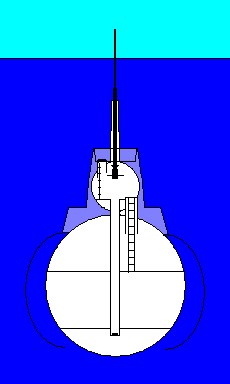 In diving quickly, the negative tank is important. By flooding this tank the submarine becomes negatively buoyant. This gets the boat under water quicker. Once submerged, though, the negative tank will be blown or pumped out, to restore neutral buoyancy. You want to be heavier than water as you dive, but you don’t want to stay that way once you’re under. If the negative tank remained full and all power was lost the boat would quickly sink below crush depth and kill everyone aboard.

Buoyancy and trim tanks are used to adjust the centre of balance of the submerged submarine. By pumping air and water back and forth between them, the diving officer can balance the boat. In this graphic, with the main ballast tanks flooded, the boat has submerged. The purple shading indicates free flooding areas of the superstructure. Water can freely flow in and out of these area, but has no affect on displacement. The superstructure is made free flooding to avoid air pockets that can affect trim, or potentially release a cloud of bubbles that might give away the boat’s position.

There are also fuel ballast tanks. The diesel fuel is kept in these open bottomed tanks. Because diesel fuel is lighter than water it floats at the top of the tank, where it can be drawn off and used. (Prior to use it will be run through filters to remove any water that might have become mixed with the fuel.) As the fuel is used its place is taken by water, so that the tank remains full.

The ballast, fuel, and trim tank arrangement shown in this graphic is typical of an American fleet submarine. The light blue tanks are main and variable ballast tanks. The central ballast tanks are divided along the central axis of the boat, and are located outside the pressure hull. When submerged, these are always completely filled with water. If these lightly-constructed external tanks were only partly filled with water they would probably collapse at depth. Since they are filled with water, and remain open to the sea at the bottom, the internal and external pressure is equalised.

One of the engineer officer’s jobs is to keep the trim adjusted as fuel is used up. Fuel oil is lighter than water, so the boat becomes heavier as it is used up. The fuel ballast tanks, as well as the clean fuel tanks, are in red.

The small purple tank behind the forward fuel tanks is the negative tank. This is located inside the hull. The green tank, at the middle of the boat, is the safety tank. The small brown tank in the top of the forward main ballast tank is a sanitary tank. This one receives waste from the officers’ head. Another sanitary tank is located aft, serving the enlisted head.

The dark blue tanks at the bow and stern are the trim tanks. The light blue tank at the extreme bow is the bow buoyancy tank. This is used to adjust the angle on the boat. By blowing this tank as the boat surfaces, an up angle may be achieved.

The bow and stern planes, which project out to the sides of the boat, are used to “fly” the boat through the water. By varying the angle on these planes the boat may be made to rise, fall, or remain at the same depth as it moves forward. Since the boat is normally trimmed to be slightly positively buoyant, the planes are used to hold it down. This is a safety factor. If all power is lost it is normally preferable to slowly rise to the surface and not to sink. Even in wartime there is always at least a chance of surviving. If you sink all the way to the bottom in mid-ocean there is virtually a 100% certainty of dying.

In American boats, the planes were operated by men turning large control wheels which were geared to shafts that operated the planes. In a manner similar to the power steering on the car, hydraulic power was used to boost the mechanical input, so that very little effort was actually needed to move the planes. In German submarines the planes operators used small levers to control electric servo motors that moved the planes. The wheels were also there, but were only used if there was a problem with the power mechanism.

Any submarine follows a carefully rehearsed procedure in order to get under water. These procedures are carefully followed even in the direst emergency situation, since skipping a step can—and has—sink the boat and kill everyone aboard. The procedures given here are those for an American fleet submarine of the Gato Class, such as Bacalao.

Stop engines: In the control room the diving officer—or the petty officer of the watch, if the diving officer hasn’t reached the control room yet—gives the order to stop engines and switch to battery power. The diesels are shut down, and in the manoeuvring room the electricians take the motors off generator power and put them on battery power. At the same time speed is set at all ahead two-thirds. 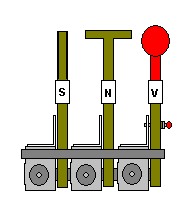 Close main induction: The main induction is a large air intake pipe, located at the rear of the conning tower. It has to be closed before diving or the engine rooms will fill with water. This was what happened to the USS Squalus, which was sunk on a training dive in 1939 with the loss of half her crew. One theory, never confirmed, was that the vent operator, in trying to flood the negative tank, accidentally opened the main induction instead. Following that accident the safety (S), negative (N), and main induction (V) levers were changed so that they could be instantly diferentiated by touch. In addition, a spring-loaded pin was added that locked the induction lever in position, so that two hands were needed to move it. Commonly, the induction lever was also painted red.

Pressure in the boat: The main induction is normally the last hull opening to be sealed. Once this has been done, the hull opening indicator board will show all green lights. To confirm this, air pressure is released into the hull. If the pressure holds it indicates that all openings are sealed.

Open main vents: Ballast tank vents are opened, allowing the tanks to fill with water. As soon as there is pressure in the boat the negative tank is flooded, to increase diving speed.

Rig out bow planes: The bow planes, which are kept folded up against the superstructure to prevent damage while surfaced, are rigged out and set on full dive. The stern planes are used to control the boat’s angle.

Close vents: All vents are closed when the boat reaches 45 feet. Speed is reduced to 2/3 speed.

Blow negative: When the depth is 15 feet short of the desired depth, the flooded negative tank is blown to restore neutral buoyancy. This tank is never blown completely dry at sea in order to avoid sending air bubbles to the surface. Once the flood valve is closed, the excess air pressure is vented into the hull.

How Do Submarines Dive and Surface Video