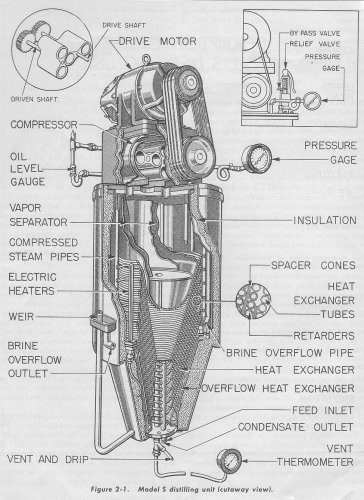 Next to the oxygen we breathe, perhaps the important factor in sustaining human life is fresh water. A person can go several weeks without food, but no more than a couple of days without water.

A submarine, operating in mid-ocean, well away from land and any convenient source of fresh water, has only two options available for supplying the needs of the crew and the even more voracious needs of the boat herself. Either a great deal of space must be given over to fresh water tankage, or the boat will have to make fresh water from the inexhaustible supply of salt water surrounding her hull.

Fleet submarines did both. Fresh water tanks were supplied, sufficient for a few days’ requirements, and these tanks were then kept topped up by the on-board production of additional fresh water through the use of distilling plants in the engine room. During World War II, the standard distillation plant consisted of a pair of Kleinschmidt Model S distillation units, such as the one shown in the cutaway illustration on this page. (Some surviving fleet boats have had their Kleinschmidt distillation unit replaced by newer types. In nearly all cases, the original two-lobe Roots compressors were replaced by three-lobe General Electric compressors, even if the original distiller remains.)

Fresh water production is a relatively simple process. Seawater is heated to the boiling point, producing steam. Since the steam is produced at well below the temperature where the salt would vaporize, the salt remains in the liquid in the distiller and the steam is condensed back into fresh water. The fresh water is collected in tanks and, after proper testing, can be used for drinking, cooking, bathing, and maintaining the batteries.

The testing is important. Distilling removes the salt and other dissolved solids from the water, but it does not remove any impurities that vaporize at or below the boiling point of water. Thus, water contaminated with gasoline or other volatiles will still be contaminated after distillation.

The purest water was required not for drinking, but for use in the batteries. The electrolyte used in lead-acid storage batteries consists of sulfuric acid diluted in distilled water. During normal operation, some of the water is lost, breaking down into its component elements (a molecule of water, as we remember from Science class, is made up of two hydrogen atoms bonded to a single oxygen atom). These gases are removed by the ventilation system. The sulfuric acid remains, the solution growing stronger as the water is lost, and additional distilled water is added to each cell as needed.

Put in more familiar automotive terms, electrolyte is added to a new battery, after which only water is added. Distilled water is important because any impurities in the water will reduce battery life.

1A4. Consumption of fresh water. A modern submarine consumes during a war patrol an average of approximately 500 gallons per day of fresh water for cooking, drinking, washing and engine makeup water. In addition to this consumption the main storage batteries require about 500 gallons of battery water per week; giving a total requirement of at least 4,000 gallons per week. These minimum requirements will leave enough water for each man in the crew to have a bath at least twice a week.

The operation of the submarine itself determinds when the distilling plant should be used. On some vessels, the auxiliary tanks are filled with fresh water prior to leaving the tender or base. This water is used for showers and washing of clothes and supplements the normal capacity.

Small fresh water tanks are located in the forward and after compartments and contain emergency fresh water, but this supply is held in reserve and is not normally used.

While few of us would want to live in the crowded, uncomfortable conditions aboard a World War II fleet submarine except when compelled to do so by the requirements of Naval life, the fact is that, compared to most other submarine services during the same period, American subs could almost be called “luxury” vessels. Twice a week showers in fresh water—even the “Navy” type shower, which consisted of turning on the water just long enough to get wet, soaping up, and then a quick rinse—in the American Navy might be contrasted with the salt water showers in other countries’ submarines. Bathing in salt water is far from satisfactory, even with special salt water soap. Personnel aboard German long-range U-boats might go for two or three months without a shower, nor did they have the benefit of a fleet boat’s air conditioning.

American submariners were at much greater personal risk than most other Navy personnel. The Navy did what it could to make their duty comfortable, including the best available food and such “luxuries” as fresh water showers. In the case of the latter, it was the efficiency of the high capacity distilling plants that made the difference.

Purification of Water during WWII (1943) US Army Training Film