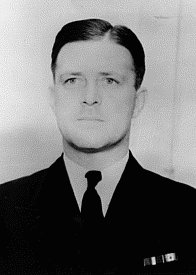 Born in Flushing, NY in 1896, Charles “Swede” Momsen was graduated from the United States Naval Academy in 1919, and from the Submarine School in 1922. (Despite his nickname, Momsen was of German-Danish extraction, and not Swedish.) His interest in submarine rescue was piqued by the sinking of the U.S.S. S-4 in December 1927, when six sailors were able to survive for three days in the torpedo room, but were unable to escape.

Momsen developed his “Momsen Lung” escape device while serving with the Submarine Safety Test Unit aboard S-4 from 1929 to 1932. With proper training in the Submarine School’s escape tank, this could be used to safely ascend from as deep as 200 feet.

In May 1939, Momsen was in charge of the rescue of 33 sailors trapped in the forward section of the sunken Squalus, which went down in 243 feet of water off Portsmouth, NH. The depth was too great for a free ascent using the Momsen Lung, and the McCann Rescue Chamber—another Momsen creation, but named after Allan McCann, who took over the work of perfecting the device after Momsen was assigned to other duties—was used instead. After the survivors were rescued, Momsen supervised the raising of Squalus which, after repair, was recommissioned as U.S.S. Sailfish.

Momsen had been one of the pioneers in the developing of a helium/oxygen mixture for deep dives, which proved important for the divers working on the Squalus. The nitrogen in air has an intoxicating effect on deep dives. Replacing the nitrogen with helium avoids this problem, allowing the divers to stay down longer and go deeper.

During World War II, Momsen was deeply involved in detecting the fault in the impact portion of the Mark-6 exploder mechanism used on the Mark-14 submarine torpedo and Mark-15 destroyer torpedo. Momsen contributed to the field modification of the firing pin and guides, referred to as the “PHM” (Pearl Harbor Modification) by torpedomen.

Momsen commanded Submarine Squadron 2 and Submarine Squadron 4. He won a Navy Cross and Legion of Merit commanding the first American wolf pack in 1944. Momsen pioneered the use of low-frequency underwater sound transmission for communications between the submarines. This differed significantly from the German wolf pack tactics, which coordinated homing the u-boats onto the convoys by radio from headquarters, but left the attack itself a free-for-all melee.

In October 1944, eight men used their Momsen Lungs to escape from the U.S.S. Tang, which had gone down in 180 feet of water. Three died during the night and the rest were taken prisoner. The details of their escape didn’t become known until after the war, when they were liberated.

The Terrible Hours: The Man Behind the Greatest Submarine Rescue in History by Maas, Peter (1999) Hardcover Back from the Deep: The Strange Story of the Sister Subs Squalus and Sculpin