A number of devices were used both to detect submerged submarines, and to allow those same submarines to locate their targets without having to surface or raise the periscope. The earliest of these devices were hydrophones.

Hydrophones are extremely simple in concept. In the most basic form, a microphone is extended through the bottom of the vessel. By rotating the microphone, the sound operator is able to listen for propeller and machinery noises that might indicate the presence of a submarine.

It didn’t take long for the engineers to realise that a pair of highly directional microphones, separated by a few feet and able to be rotated at the centre of the connecting bar, would be more efficient than a single microphone. With each microphone feeding into the operator’s corresponding earphone, a skilled operator could get a more accurate bearing on the sound source. 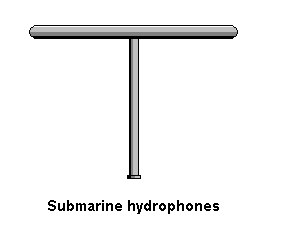 Between the wars, this concept was developed. The American “JP” submarine hydrophone was a simple, highly-effective design. Essentially, a long iron bar with a coil of wire wrapped around it. The back was covered with a sound attenuating material, so that it was relatively insensitive to sounds coming from the back. This was mounted on a shaft, with a hand wheel in the forward torpedo room that the operator used for training the head. When necessary, the operator could plug the cable into a power source to remagnetize the iron core. (Hard blows can demagnetize magnets, so this type of hydrophone can stop working after a close depth charge detonation until the core is remagnetized.)

The “JP” head was mounted on the upper deck of American fleet submarines. In this position it could pick up the sounds of surface vessels easily, without interfering sounds from within the submarine’s own hull. Anti-submarine vessels, of course, mounted their hydrophones below the waterline. When the submarine was surfaced, the the “JP” gear was secured (turned off). 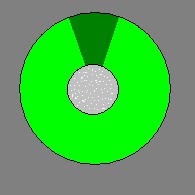 One device used to aid the operator in zeroing in on the target bearing was the “magic eye” on his amplifier panel. This was actually a special vacuum tube, with the top sticking out through an opening in the panel. A phosphor coating created a pie-shaped image on the top of the tube. Older people will remember the same sort of device used as a tuning meter on old FM radios. As the signal gets stronger the “pie” gets narrower, until it becomes a line at peak strength. The operator could watch this to augment his own listening skills.

While hydrophones alone could give a bearing on the target, they were severely limited in their capabilities. Range had to be estimated based on things like sound volume, which called for a lot of skill and experience on the part of the operator. Target speed was more easily determined, since the operator could count the revolutions of the submarine’s propellers. As long as adequate intelligence was available on the type of target—particularly the propeller pitch—a fairly accurate determination of its speed was possible.

Presuming the target’s screws have a pitch of 36″ (that is, a single revolution of the screw will move the vessel forward by three feet), if the screw is turning at 100 rpm, the target should travel 300 feet in each minute, or 18,000 feet in an hour. Dividing that figure by 6,076 (the number of feet in a nautical mile), gives a target speed of just under 3 knots. (This isn’t particularly fast, obviously, but for most submerged submarines prior to the advent of nuclear power it wasn’t particularly slow, either.)

A major limit on the effectiveness of hydrophones was the speed of the vessel on which they were mounted. Anti-submarine escort vessels tended to be relatively slow, often with a top speed on no more than 18 knots. There were two reasons for this. First, the vessels they were escorting were usually even slower, so high speed wasn’t needed to keep pace. And, more importantly, the effectiveness of their detection gear diminished rapidly as speed increased. At full speed, the range of a destroyer’s hydrophones was so limited that they would probably have to hit a submerged submarine in order to detect it. The noise of the escort’s passage through the water created this problem. In fact, for this reason destroyers were not generally used as convoy escorts in World War II once purpose built warships—sloops, corvettes, frigates, or destroyer escorts—became available.

During the First World War, Allied scientists addressed the problem of submarine detection in the hope of finding something more effective than hydrophones. The result of their investigation was called Asdic by the British and Sonar by the Americans. (Asdic is an acronym for Anti SubmarineDetection Investigation Committee; Sonar comes from SOund NAvigation and Ranging.)

The simplest form of Asdic combined hydrophones with a sound source. The emitter sent out a sound pulse, which would reflect off the target. The length of time it took for the sound to travel to the target and for the echo to return could be used to calculate the range. This is actually the same principle used by an echo sounder to determine the depth of water.

In the period between the wars, Asdic was sufficiently developed for the British Admiralty to come to believe that it had rendered the submarine impotent as a stealth weapon. It took only a few weeks for them to realize that it was much easier to acquire a target in an exercise (where the A/S vessels knew there would be one around somewhere) than in combat, where the captain of the U-boat was going to do his best to remain undetected.

Of course, anti-submarine forces weren’t the only ones using detection gear. Hydrophones were fitted to submarines at an early stage of development. Range was significantly enhanced in a submerged vessel, both because a submarine’s electric motors were quieter than a surface ships engines, and because of the elimination of surface noises. By the end of World War II, German hydrophone operators could detect enemy surface ships at ranges of as much as 50 miles.

Sonar was a mixed blessing for submarines. It could be used to give an accurate range and bearing on a surface target, but the emitter also provided a bearing for the enemy’s A/S forces. (Radar has always suffered from the same blessing/curse syndrome; it warns you that the enemy is coming, but also tells the enemy where you are.) The Sonar head in the picture was part of the Sonar suite on an American fleet submarine, and could be retracted inside the hull when secured.

Pre-war American submarine theorists were so confident of the capabilities of Sonar in submarines that doctrine called for all attacks to be made submerged, using only Sonar, and never exposing the periscope. It was believed that radar had developed sufficiently that exposing the periscope was too great a risk. As it turned out, periscope attacks remained as the primary method, since the Sonar attack methods resulted in too many misses. Also, Japanese warships were slow in adding radar to their equipment, but their escorts proved to have excellent sound gear, so the American Sonar emitters provided a better target than the exposed periscopes. For this reason, the emitters were usually utilized on a single-ping setting for rangefinding, rather than in active searches.

Since a Sonar transducer combines an emitter with a receiver, it could also be used to listen for an escort’s Sonar. When this happened, the head could be rotated to get a reciprocal bearing. Escorts generally emitted continuously.

Modern submarine doctrine calls for boats to be equipped with powerful, highly-sophisticated, active sonar, and for that gear to almost never actually be used. Most detection is still accomplished using a modern incarnation of the old hydrophones, though now linked to a suite of electronic gear that gives far more information than the old-time operators were able to obtain just from listening. The equipment is now sophisticated enough that ranges can be determined using passive detection gear, for instance. At the same time, operator skill is still the most important factor. Contrary to what turns up in a lot of techno-thrillers, computers don’t do nearly as much in the way of analysis as many people think, and contacts are still identified mainly by the operators based on skill and experience, though that skill is augmented by very sophisticated equipment.

Up through World War II, submarines were mainly used in an anti-shipping role. Initially, the targets were surface warships. Germany recognized the utility of the submarine in the role of a commerce raider early in World War I. That role was developed to its ultimate in World War II, where Germany attempted to use its U-boat force to shut down the convoy routes from the U.S. to Britain. (Though never as successfully as either side suggested.) American submarine forces in the Pacific actually didsucceed in the virtual destruction of the Japanese merchant fleet. At least, they were able to do so once the torpedo problems were finally solved after about a year and half of frustration.

Today, the primary target of a submarine is usually another submarine. Hence, the importance of silent operation. The submarine that hears its enemy first will usually be the victor in such an encounter.